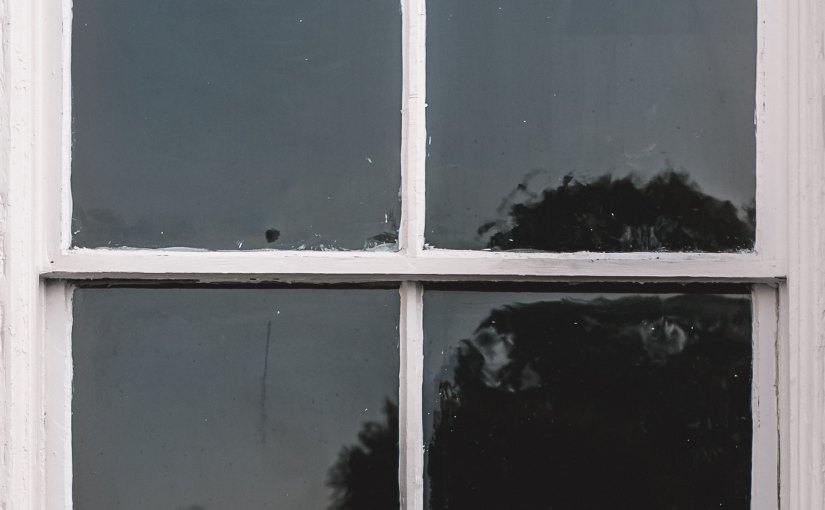 The almost garden of the house that my friend Meredith wanted to break into, was one dying bush, a dirty rock and two pot plants with spider ferns crawling up their sides. I knew they were spider ferns because our gardener grows them behind his cottage but he grows them in an old tub, one of those claw types although it’s not so old. Anyway, my friend Meredith didn’t even lift one of the pots because she says that’s too obvious a place for keys and poor people don’t like to look too obvious whereas rich people don’t think of it either way.

After we knocked on the door and no one answered, I lifted them both up just in case. As usual, Meredith was right. She always knows about these things. She’s fourteen and much smarter than I am.

We found the key under the windowsill at the back of the house, in fact the key found us, because we stepped on a loose porch-board and it hit the sill and the key popped out and we nearly missed it because it was rusted the colour of the house. Meredith told me she didn’t want to use a key anyway because then it wouldn’t be bona fide ‘break and enter’, so she put it back.

There was an empty house next door where we didn’t need a key, we just walked through a wall or where a wall would have been if it hadn’t fallen down with neglect. Some people are so neglectful.

We waited there watching the house,  for what seemed like too long but of course time drags too much when you just wait and have nothing to do and Meredith made me be quiet, by placing a finger over her mouth every time I started to speak and then by putting her hand over my mouth when I kept on talking.

A man soon came along pushing a wheelbarrow with a large sack of potatoes and two cabbages perched on top. He went behind the house with the spider ferns, propped up the wheelbarrow and opened the door. I saw Meredith’s eyes narrow when he didn’t even use the key. She had pushed the key so far back it had fallen through and under the house but he didn’t look for it because the door had been unlocked all along. The man was wearing denims with knee worn holes and a dirty shirt. Maybe he was one of the dirty men Meredith’s mother warned us about. Although I know it’s not that kind of dirty but maybe the dirty dirt shows the other kind of dirty. He also had tattoos like sailors have, but I couldn’t see if they were of naked mermaids or not. Meredith’s eyes opened wide but of course she wasn’t scared. Meredith’s not scared of anything.

The man came back out, tossed the bag of potatoes over his shoulder, and we could see how he got dirty, because the bag puffed out dirt, kind of like smoke and the dirt went all over his shirt and down his back. He picked up one of the cabbages in his other hand and went back inside his house. Some people always eat cabbage. And they often smell like cabbage. An old man who sat next to us on the train smelled like cabbages .

Here’s what happened next. Meredith ran out and grabbed the other cabbage, she tossed it to me and kept running, but I dropped it. I could see Meredith’s eyes going as black as her clothes, her eyes always go black when she’s cross with me so I snatched up the cabbage and tossed it back over to her. She ran around the side of the house where we’d been hiding and threw it as far as she could into the backyard, which was all weeds and rubbish, then she grabbed my hand and dragged me into the empty house.

The man came outside again and looked at the wheelbarrow for ages, kind of like he thought the cabbage would rematerialize. If he’d started shaking his head we wouldn’t have been able to hold back our laughter, it would have all been just too ghastly, but then he walked over to where we were hiding. I ducked down but Meredith just kept standing and staring. I wondered if she was going to use her little-girl voice but she didn’t.

“Hey you. There,” the man said, lifting his hand in half a wave. “Do you know you’re trespassing?” Meredith and I exchanged a glance which said of course we do but then Meredith did go very little-girl. “No, please, mister. We thought nobody lived here anymore.”

“Well,” the man said, “that may be by the by. But folks don’t always live where they own. And someone owns this house.” Meredith grabbed at my hand; kind of grazed it, not held on and I followed her out. She stood in front of the man, with her hands behind her back, eyes lowered and her head tilted sideways and one of her feet hooked back over her other ankle.

The man was having none of it. “Go and get that cabbage you threw away,” he said, his hand doing a wide arc across the yard. We both took a short breath and looked over at his house; he must have seen us from his window.

“If you knew I had thrown it why did you stare at the wheelbarrow then, like you thought the cabbage was coming back?” said Meredith. That’s how Meredith is.  Now she didn’t have her little-girl voice; she sounded like her mother, all vowels and sniff nosed.

The man shook his head; he looked at me and then at Meredith. Longer at her because of how gorgeous she is. I’m used to folks doing this between me and her. Then he turned away and strode over to the yard and came back out of the long grass carrying the cabbage. He plucked a slug from it, flicked the slug to the ground and went back into his house without looking at us. Meredith followed and I followed her. That’s how we have fun talking to these people. Although we’ve never gone into their houses to talk to them and maybe that’s what Meredith meant about ‘doing a house,’ not just stealing. Anyway, the man couldn’t be dangerous if he didn’t even kill slugs; our gardener puts all the snails and slugs into buckets of salt and they shrivel up like they’re burning alive and he doesn’t give a toss.

The man had gone into another room and didn’t see us come into his house and we walked like we do when we’re trying not to wake everyone up when Meredith sleeps over and we sneak out for midnight feasts in the park. He had the ball game going but his television was inside and we didn’t see any beer.

Meredith put her finger to her lips again as the man went back outside and we watched him pass by the window and go down the street, pushing the wheelbarrow. The little grocery store was a ten minute walk so we figured we had time to look around, but there was nothing interesting and everything smelled like cabbage even the potatoes cooking in a huge pot on the stove. It was quietly bubbling, Cook calls that simmering and sometimes she boils up bones like that for father’s hunting dogs. Meredith poked through the drawers in the kitchen and held up a leaflet: Help The Homeless, it said. Saturday Soup Kitchen 6 pm. There was an address circled in red ink, of course we had never heard of it and of course Meredith wanted to go. I had to remind her we had to be at the station at 5 o’clock to meet her mother, but she said her mother was always late which was true. I had never known her mother to be on time but then we were never on time either so we really didn’t know if she was late because she was always there waiting. Anyway it was only 2 o’clock, so we had lots of time and then we saw the man coming back.

His wheelbarrow was full of wooden slatted boxes, the kind Cook uses for kindling; they were stacked on top of each other but balanced so they toppled a little bit to one side. The man kept stopping and straightening them, we could see this from the window but soon he was at the backdoor. This is how Meredith is; she hurried over and locked the backdoor from the inside, there was this little slide-across bolt the kind they have in public toilets sometimes, especially here in this part of town.

We held our breaths and watched the door. We could hear the man twisting the knob and pushing on the door, it rattled the bolt but the door held, and then after he’d done it lots of times Meredith opened the door and the man fell inwards nearly knocking into her. But I’d jumped back and hidden behind the other door and pushed my fist into my mouth to stop from laughing aloud, it was all just too ghastly.

The man did a strange thing, he didn’t yell at Meredith, like I thought he would but spun around, shut the backdoor and pulled the bolt across and then he took out a key; it was a different key from the one Meredith had lost. This was a shiny key but he didn’t use it, he just stood with his back braced up against the door like someone was trying to get in from the outside. Meredith, this is how fun she is, said “Please mister I’ve come about the Soup Kitchen. My friend’s gone home but I want to help.” He nodded kind of slow and smiled and instead of arguing like I thought he would, said, “Sure, sure you do.” And went over to the huge pot cooking on the stove and stirred the potatoes with a long handled spoon. I thought it was a bit strange he hadn’t got cross because he seemed crosser when we were just trespassing in the deserted house next-door. And it was kind of like we had broken in to his house but Meredith said, you have to break something like a door or a window to actually break in, so maybe that’s why.

Meredith half looked at me hiding behind the door and touched her lips with her finger, she went over to the sink and started to chop up the cabbage with a large wooden handled knife. The man came over and told her to do it this way. “Just like this,” he said, his voice low and different. His arms went around her from behind and he directed her hands. Then Meredith turned on the faucet and washed the cabbage. The water spluttered and the pipes whined and rattled and screeched like someone trying to get out.

Myra King lives along the coast of South Australia. Her poems and short stories have been published in many literary magazines and anthologies. She has won the UK Global, come second in the Cambridge Fiction Awards and been shortlisted for the US Glass Woman Prize and the Scarlet Stiletto AUS.