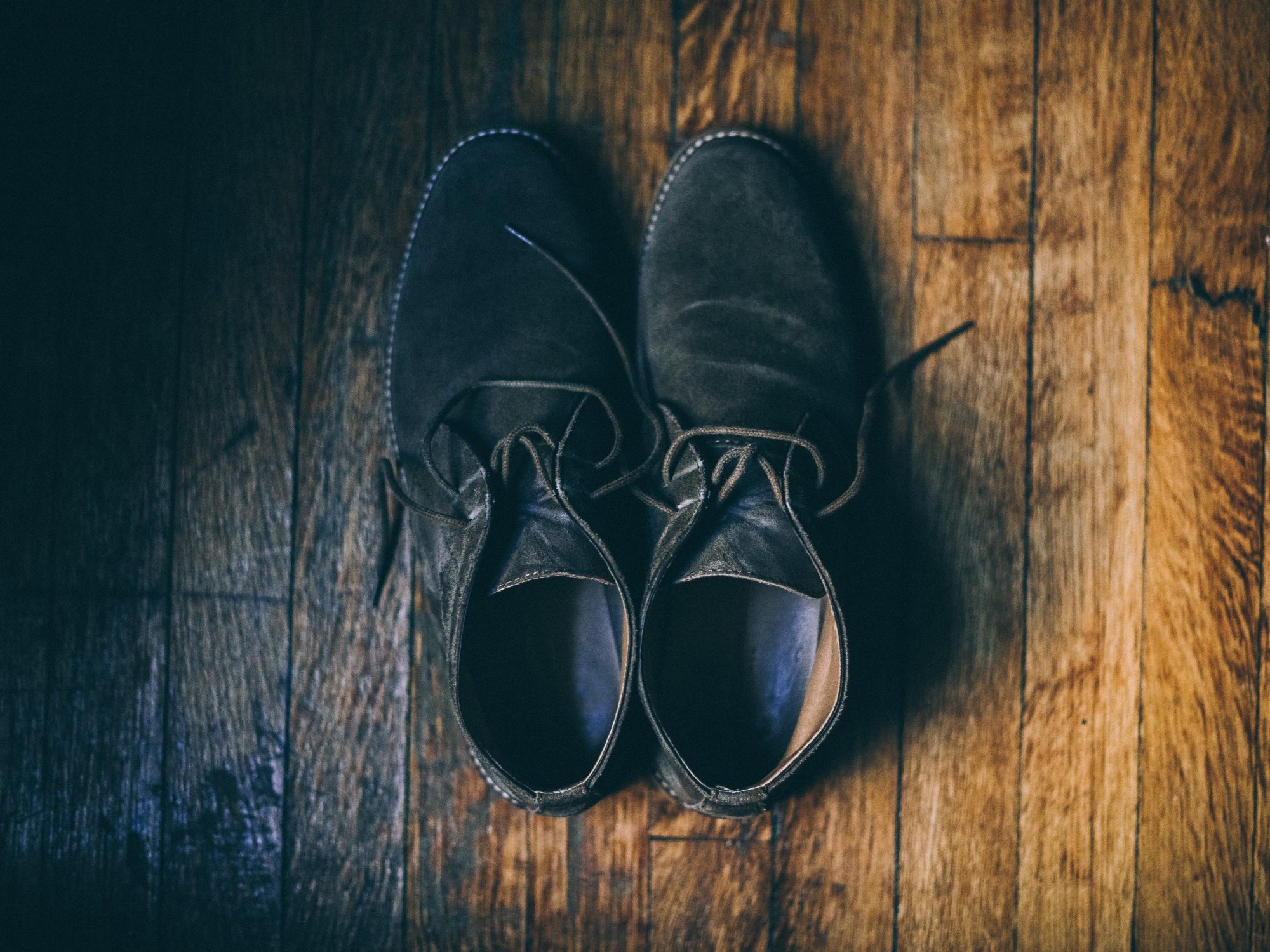 In the corridor beside the gantries, she hid with her hands in Oliver’s shoes. She leaned right down, till her cheek was on the carpet, feeling the spread of her fingers where his toes would be.

Downstairs, on stage, the performance was coming to the end of Act I. She sighed, sat back up, and put the shoes back under where the rest of his Act II costume was hanging. She liked to stay here during the show, officially as costume designer ready for quick changes. In this small theatre building they were renting, nothing was soundproofed. No one wanted it to be their footsteps or their conversation that threw off a whole performance. The actor’s voices created a silence that was like a spell; complete and unbreakable. For this, she thought anyway, Oliver’s voice was the most effective because he made it softer. She felt like he understood the potential of the building, forced it to breath in time with him by drawing back just a little. Under this spell, no one could ask her what she was doing with shoes on her hands; no one was supposed to walk this way at all. In this silence, her secret, her adoration, breathed with the building, with Oliver.

She followed his lines on her script:

Niamh: But where can we go? What’ll we do when we get there?

Malachy: We’ll go as far as we can. I want to beat those fucking rain clouds Niamh. I can’t take more cold! If we try to leave now, it’ll be hours before anyone notices. We can disappear, and no one will even know it. Maybe no one will even mind, in the end Niamh.

She loved how Oliver said “Niamh”, with two syllables, like Nee-Uv.

She didn’t, though, like the play all that much. It was sentimental and new, and the director was a fretful angry man; David. He came to every rehearsal in the same denim jacket and sat there with his laptop out, covered in the stickers you get from Amnesty International when you sign a petition in the street. She’d seen him, peering over that screen, leering at Molly. Molly was playing Niamh, and Niamh seemed some kind of fantasy for him, following Malachy all the way around the world with her dark hair and her sweet, quick heart only to die on a tiny boat in the night in an unfamiliar sea. David screamed and shouted and ran things over by an hour, or cut them short when everyone had got up at 7am. She hated him for his cruelty, but more for what he had written into life. It was only the second night, and already rumours about Molly and Oliver were falling off the stage and into the real world.

She waited until she heard the murmur of the crowd before standing up and tucking her script away back into her bag. Molly was the first up the stairs from backstage at the bottom of the corridor.

“Alright I think, bit low energy maybe”, Molly replied, taking the tights she was holding out to her and starting to pull them on under her skirt.

“It sounded good from here anyway”. She held out the rest of the costume.

“Thanks a million Laura” Molly said, and turned towards the dressing room. Laura watched her go for a moment. Molly was tying her hair up; she hoped she hadn’t been on stage this whole time with that bobbin on her wrist.

“Could you give me a hand with this?” Oliver. Laura had made him a shirt for Act II, but had put the fastening very high up on the neck by mistake, so that it was hard to do up yourself. She nodded.

He was taller than her, and now she was eye level with his chin, feeling his breath on her hands. Laura felt lately like there was a flood that followed her, that she was only ever just about ahead of. Here, she felt it rise, coming to rest just under her nose as she did the fastening. He lifted his chin to give her space, and she wanted to throw her arms around his neck and lift herself up, away from the flood, up to his height where it couldn’t get her. She took a small, extra second, and stood back from him. The water sank a little.

“Thanks!” he said, and bounced away down the corridor. The water drained down the stairs after him. She smiled to herself that he didn’t feel the need to check his costume in the mirror.

She heard a shout for their five-minute call, and watched the rest of the cast traipse past her, back downstairs. The lights went darker, and she sat back down and took her script out again.

There was never much of a routine before the play started, always a lost pair of shoes, or a new tantrum from David. No one really noticed then, except Laura, how late Oliver was on the fourth night. Ten minutes until open, her breaths were coming shallow with worry, and David stormed into the corridor. He seemed not to notice Laura, but she felt like he knew someone was watching. He was performative, like an angry person in a film, pacing around on his phone

“Fucking nothing!” he screamed, and kicked the piping running along the wall. “Molly!”

Molly came out to the corridor then. Laura liked Molly. They had been in the same class at college. They always commented nice things on each other’s pictures on instagram. Once they had run into each other leaving the library and gone for a drink and Molly had cried about her sick cat to her.

“I can’t get through to Oliver, have you heard from him?”

“If he doesn’t show up in the next like two fucking minutes then I’m gonna do his part tonight. Just to give you a heads up”.

Laura saw real fear cross Molly’s face at the thought of acting across from David, of acting in love with him.

David could no more do this to Oliver than to Molly. He was too cruel to stand where he stands, say his words in his clothes.

She gathered Oliver’s costume up, waited until the cast came out and started downstairs, before slipping into the middle of them, four pins in her mouth so that she’d look like she had a task to do. Downstairs, she got changed in the dark backstage, rolling up the legs of the trousers, pulling the shoelaces as tight as she could, pinning the shirt at the back to make it fit better. The fire announcement began as she stuffed her hair into his hat, patting around the edges for strays. She could hear David stomping around upstairs, and hoped that he’d still care enough about the play to stop making noise soon.

She waited for Oliver’s, or Malachy’s, first scene, running over his lines in her head. She knew them perfectly. She had studied them like they were sacred the past few days, had come to far more rehearsals than she really needed to hear Oliver say them. Her hands shook with worry, with the burden of filling his place, with disgust at the thought of David standing in these shoes.

She felt a hand on her shoulder and turned around. David was there, with the rest of the cast peering at her from behind him. Without waiting for even a gesture from him, she turned and slipped on stage, too early for her scene, and paced at the back. As she became Malachy , her anxiety dissipated. She was safe here, in Oliver’s place, holding something precious for him.

The performance went completely smoothly. They heard from Oliver at the interval; he had been knocked off his bike and had a concussion and a broken ankle. He was safe, and she imagined Molly texting him later about what had happened, and him seeing her name and imagining her in his clothes.

Oliver couldn’t come in the next day. When Laura arrived, Molly and David were screaming at each other. She waited in the corridor, with his costume clutched to her chest. She heard a door slam and footsteps and Molly rushed into the corridor. She said that David had left, that we were to run the show ourselves tonight.

“Thank you so much Laura”. They hugged, the bundled costume caught between them.

The same thing happened the next few nights, until David seemed to give up on the whole production. He stopped even watching, spending the whole show smoking on the balcony and then only going downstairs at the very end to collect his praises and his ticket takings. The cast was grateful to her for creating such a distance between them and David. Every night they flocked around her, chatting, asking for help with their hair, laughing with her. She thought all the time of Oliver, wondered what he was hearing about what was going on, if he was curious enough to come watch, feeling that same flood rising and falling around her.

She still changed backstage in the dark for every show. She preferred it to be dark; it made it easier to forget herself, to inhabit Oliver. On stage, she tried to copy everything, his accent, his gait, squinting slightly to change the shape of her eyes, and always looking out, past the yellow lights, to where he might be in the audience. As she walked home and as she fell asleep every night she thought of nothing but his eyes on her.

On the thirteenth night, the second last, she changed as usual in the dark. As she was tightening the lace on her shoe, it snapped off in her hand. She had pulled too hard and it was only cheap and elastic. The break pinched her skin a little. She tested the shoe; it was very loose, much too big for her. She tucked the raw end of the lace inside and stood up as the fire announcement came on.

As she stepped out, gripping the inside of the shoe with her toes, she went closer to the edge of the stage than usual, so she could see better beyond the lights. The audience was small tonight; he was not there. The weeks’ worth of hoping and getting nowhere weighed heavy on her; she was tired. It was her line but she waited, let the silence grow. She walked out of step with Oliver’s blocking, and took her hat off, feeling her hair fall down around her shoulders. She didn’t pay much attention as the scenes passed her by, always looking outwards, wide-eyed.

She turned, at last, to Molly:

She stepped forward, and left her loose shoe behind. She used her foot to loosen the other one.

Niamh: I can’t leave here, what will I do? Where will we go?

As she spoke, Laura untucked and unbuttoned her shirt. She faced forwards at centre stage. Molly was backing away, until she was outside the line of the lights, almost off stage.

Malachy: As far as we can. I want to beat those fucking rain clouds Niamh.

Laura felt herself begin to shout. The rest of her clothes began to come away. They were not hers and they didn’t fit her. They slipped off without her trying.

I cannot take more of the cold. If we try to leave now, it’ll be hours before anyone notices.

Laura stood on stage naked, the trail of the costume behind her, staring

straight into the yellow lights above her.

Iseult Deane is 20 years old and a third year English and Philosophy student at Trinity College Dublin. She has lived her whole life in Dublin. She works in a cinema at the moment but likes theatre a lot more and would like to be a costume designer.