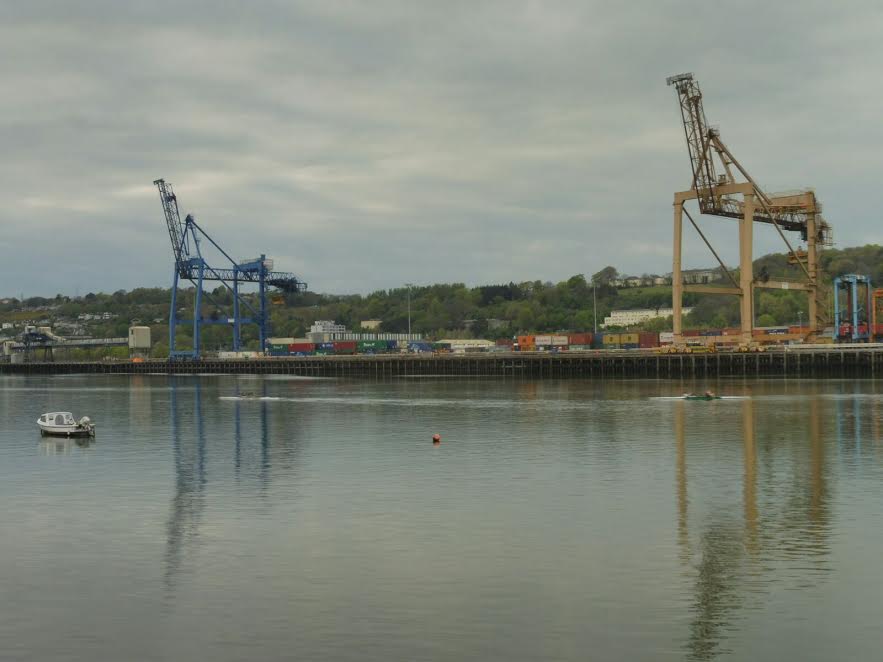 The bus creaks into the stop beside the river. The big blue warehouse buildings. Lemon sky to the left over Patrick Street. No matter what season I go here Cork City always feels hazy and lazy, like some seaside holiday place. Some humidity in the air that’s not there in Dublin. Further South I guess although I can’t see that affecting climate at such a level.

It reminds me of nauseous car journeys when I was a kid, the long brown shape of Dunnes Stores on the river out the window. Visiting Margaret and Billy and getting the spare room, the one that was Margaret’s office with all the chiropractor stuff in it. The glass jar of green liquid with the pointy crystal top, the heavy textbooks, the chair in it with the hole for your face. Me and my Mam and my Dad all had to sleep in the same room and I’d wake up much earlier than them, counting to five hundred because I was so excited and bored. I loved sleeping on the floor on the airbed with its sudden funny movements, its farty noises.

I’m meeting Ana at the bus stop over the bridge, outside Brown Thomas. I ate all six of my rice cakes on the bus even though I don’t really think I was hungry. I’m just exhausted. I slept badly. I have that indiscriminate feeling of run-down wanting that I’m never sure is hunger or thirst.

I’m early. I walk up and down Patrick Street for a while, looking in glossy shop fronts. Weirdly like a French street or something in this kind of brittle sun. It hits me that I feel really ill. My eyes doing this funny thing, like everything’s too bright. The pavement is made of these light grey flagstones that look impossibly smooth and clean like we’re indoors. I’m halfway down Patrick Street and I suddenly feel like I can’t get a handle on the depth of anything around me, like the ground is coming up to meet me even though I’m still standing up.

I sit back down at the bus stop where I’m meant to wait for Ana. The feeling is starting to subside a bit but now I’m just anxious trying to monitor it, looking around me and seeing whether the world is doing that swelling thing again. That’s what it was. Like the ground was swelling.

I have anxiety but I’ve never properly had panic attacks. I had something close to one once, after I’d seen some movie that had scared me when I was about nine. I was in the back of my Mam’s car and I suddenly felt like everything was going too fast around me. Looking out the windows was making me sick so I had to squish myself between the two front seats and look at the road head-on as it hurtled towards us. I got that for years on and off, that feeling when you’re in a car and you suddenly realize how fast you’re going, everything blurring as it melts past you outside.

I realize there are some Facebook messages from you that I haven’t seen yet.

So you’re just going there for like a day

Yeah just for this festival yoke with Ana

Long way to go to hang out with a friend

Ah yeah haven’t seen her in ages though

Well let me know when you’re back

Because I thought we’d arranged to meet tomorrow

Yeah I’ll be back tomorrow! Still on for that if you are

Yeah I’ll be free 2pm or so

No I don’t think we said evening

Oh ok. Probs won’t be back until evening because buses

Aw I’m really sorry, v all over the place at the moment!

Yeah. Don’t you have something to go to

Are you ok? Sorry again ❤

Nothing you just seem upset! Bad at telling in messages though

Good! I am glad. How’s your day going?

Okay I guess why

Why are you still messaging me on here

Ok I can stop if you want? I just thought you were upset or something.

The only thing I have in my bag, food or beverage wise, is some dark chocolate. I break off a square and eat it. It doesn’t make me feel any better.

I’m so relieved to be around Ana and her sister. Their muddy hiking boots and fleeces. Arguing gently about what groceries they should buy and bring, who’ll carry the bread and who’ll carry the houmous. I feel awkward intervening in anything as a guest, so I’m getting to drift around smiling gratefully. I guess I’m also glad her sister’s there because it means we don’t have to talk about private stuff.

The festival hasn’t really started yet. It’s only afternoon, and I get the impression that even when it’s going full swing it will be pretty chill. There are families with kids in their baggy pantaloons, the West Cork lot. The girls have gone to find loo’s and I’m there underneath a music tent where a band are tuning up, quiet fizzles of noise from the amps. The ground is muddy and pockmarked with footsteps here. The walls of the tent navy blue and the feeling again that my eyes are having trouble adjusting. It’s dark inside the tent and the flashes of drizzly sky visible at the sides too white. The ground stretches out around me too close to my face even though I’m standing it’s horrible.

‘Hey.’ Ana claps me between the shoulder blades and I jump. ‘We’re going to go for a walk since nothing’s started.’

The road plunges into damp woods. It’s the kind of country road with deep trenches of mud on either side of it, tire-sized, and a strip of grass down the middle like a widow’s-peak tuft on a bald guy’s head. Fairy lights strung up in between the telegraph poles. It’s still too bright – the sky that overcast searing white – so the fairy lights are only faint. Spots of colour that pulsate and fade, the hearts of tiny ghosts.

The woods peter out and we’re in a valley, grassy slopes either side. There are some hikers pottering around in their slick damp anoraks with their ski poles. I hear German spoken. There is a slab of stone in the middle of the valley, coffin-shaped. A disheveled man comes up to us. Eyes piercing blue.

‘This place,’ he says, unprompted. ‘This is one of those important places.’

We look at each other nervously, and he goes on, although we haven’t asked.

Ana and her sister sort of smile politely at him. Some tourists – rosy cheeked girls with skiens of flaxen hair coming loose from their hoods – are taking selfies with the stone. The thing seems to be to lie down on it. Some sort of meditation thing.

We take turns. I sit down on it after the others have had their go. It’s narrow, like an ironing board, and I’m worried I’ll roll off the side. Damp and I’m not wearing anything waterproof. It hurts my shoulder blades when I lie down, the sharp, the cold. I focus on what I can see, like it’s the opening shot of a film. The sky blank white, the grass verges of the valley on either side if I tilt my head. I lie there for a while, trying to feel something, not feeling anything. Just bits of drizzle as they spiral and stick to my cheeks, and the agitated feeling that I want to look at my phone.

Last Wednesday, my friend Craig was coming up from Belfast. We were going to go to the Pav that evening. I hadn’t seen him in months, so this was a big deal. I told you on the phone that I was going to meet a friend, since you and I had had also planned to meet up at some point that day. You got weird. I can’t really remember what you said that made me think you were annoyed, but I definitely felt like you were annoyed. I’m not sure why. He’s gay, and you know he’s gay, so it wasn’t that kind of thing. But it was something.

I only ended up meeting him for an hour in the end. I got worried about you thinking I was flaky, felt mean, wanted to do both things. I drank a pint too quickly, Devil’s Bit cider with syrupy blackcurrant pooling down the bottom. Sitting there indoors in the Pav because of the sun showers, light streaming in across the wooden floorboards. The place empty enough, everyone in there crowded around the screen in the top corner shouting at the rugby. Too loud for Craig and I to hear each other. We hadn’t talked much in ages, so we didn’t really get down to the discussions. Almost too much to update each other on.

Walking out into the sun across the cricket pitch, slightly sleepy now from the drink, shake myself, shaky vision. Out across the cobblestones to meet you at Front Arch. I saw you when I was still in the shadows coming out, you were sitting on the railings outside. Neck craned brow furrowed looking for me from the other direction looking annoyed and I suddenly wanted to walk backwards and hide. You saying I was ten minutes late. It was okay in the end, we went to the park and sat by the waterfall, wasn’t that bad.

When you left there was something about the blueness of everything in Dublin as all the light left the city and I just shuddered a bit. For some reason into a corner shop for a shoulder of Huzzar. On that ambiguous stretch of road near Busáras when I realized I’d forgotten the juice. I never spend that much time inside Busáras really. The bright expanse of floor. The glow of the vending machines lit up in the window. I bought a bottle of Tropicana and poured the vodka in when I got to Connolly station, got on a dart out to my parents house and drank it on the way. Gentle sway of the dart. You are getting sleepier and sleepier.

There’s a note in my phone that says tell Ana everything. I can date it to somewhere between Raheny and Kilbarrack when my belly was getting warm and I was starting to feel pleasant and expansive about the world. That first blush of drink going through you when all the solutions seem simple. In future I’m going to just. Why do I never just. Seems stupid the next day when you remember all your reasons for keeping the peace.

When I got in that evening my Mam slagged me for seeming tipsy, said my pint with Craig must have turned into a good few altogether. I’d practically forgotten I’d met up with him earlier, seemed like ages ago. I realized I could pretend that was what happened. Finally back after a long catch-up. I microwaved some food and sat at the table, turned happy-drunk.

They’re waggling hands in front of my face. I sit up, wipe the drizzle off my glasses, twisting them against a corner of my t-shirt.

‘What? Oh yeah. Learnt all the secrets of the universe. Totally enlightened.’

Alicia Byrne Keane is a spoken word poet from Dublin. She features regularly at poetry nights around Ireland and the UK, performing at festivals such as Body & Soul, Castlepalooza and Electric Picnic. Her poetry has been published in journals such as Headstuff, Bare Hands, Increature, and FLARE 03. She has one collection of poems, titled ‘We Could Be In The Sky.