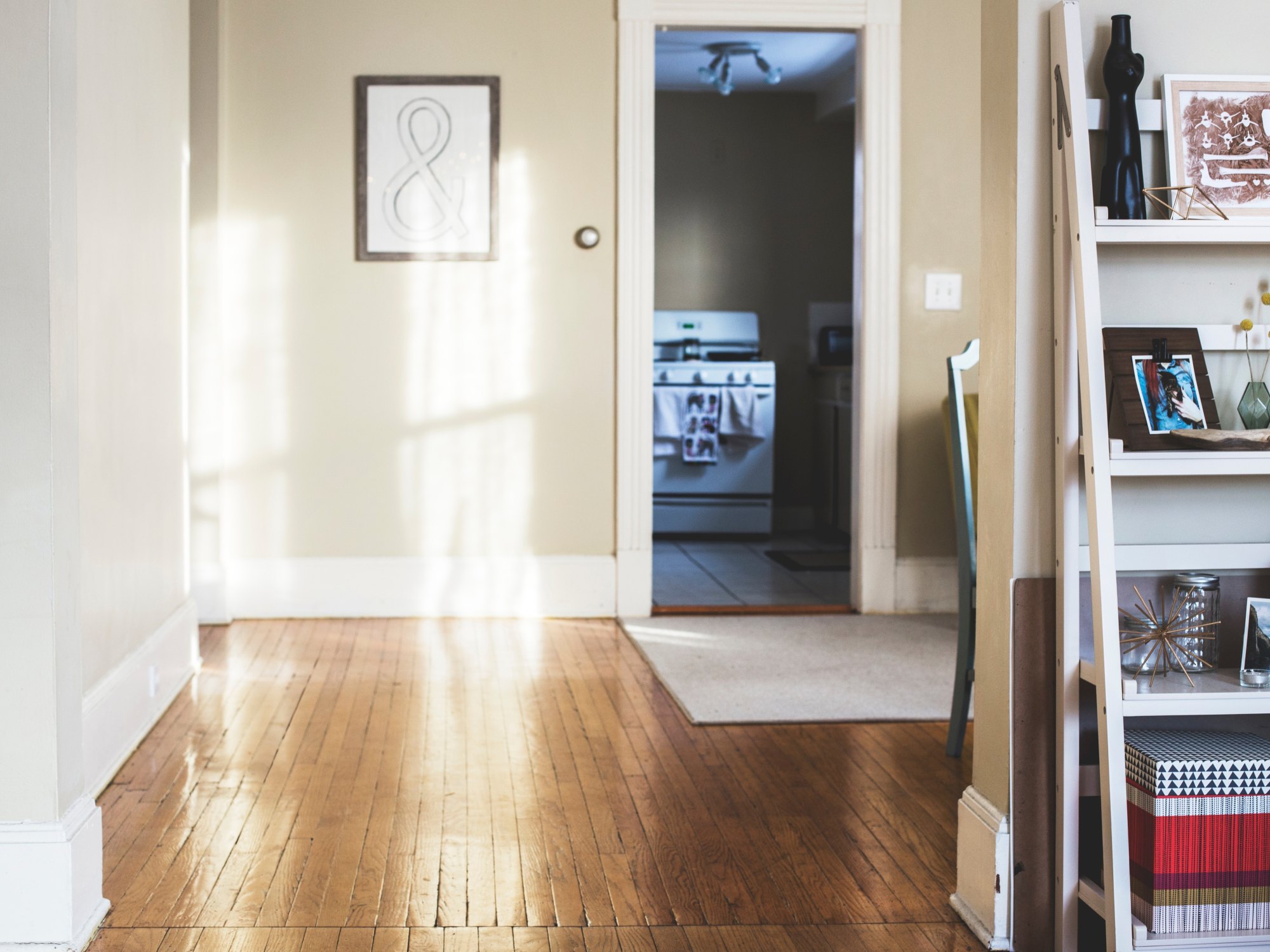 We built a bookcase from the pieces of the crib.

We found it in the corner of a bric-a-brac shop. The crib was smooth and wooden and boxy, a rectangle on rockers, and it was filled with dozens of discount scatter cushions. We loved it the moment we saw it.

It was delivered on a Sunday. We carried it, laughing, in the seagull-screech afternoon as the wind blew the hair into our faces and we tripped over cobbles and brushed past green carnations, up the little path to our house.

But we didn’t, of course, although we did end up bent double with laughter when we tried to get it up the stairs.

For a while it lived on the first floor, covered by a sheet, as we feathered the room around it with fresh paint, new carpet and triangles of rainbow-coloured bunting. We liked to go up there early in the mornings and watch through the steam from our mugs as the sparrows hopped on the window sill and the breeze ruffled the sheet like it was trying to look inside.

We held hands, and for now the secret was ours.

Three months later, it happened, so we took the crib downstairs. This time it caught on every corner and dug into our limbs, until one of us could not hold up the end properly and our hands slipped and we lost control. It slid, carelessly, all the way down and landed with a crack. For a moment we looked at it, immobile at the bottom of the stairs, one rocker broken and hanging limp. We replayed the sound of the crack in our heads. Then we picked it up and put it on end in the large cupboard under the stairs, and we snapped off the broken rocker and put it inside.

We pushed it back, squashing everything behind it, and closed the door.

Like swans we tucked away our heads and let our bodies get on with the business of living. Calmly we took down the rainbow bunting; quietly we packed up the clothes and linen. But our composure exhausted itself before we could get to the understairs cupboard, and as time passed our grief gathered like dewdrops around the only thing we had not dealt with. The crib sent out ripples, lapping us softly every time we passed the cupboard door, until we could not even look at it. One of us tried to tell the other that it was just an empty box, something which only carved up air, but that did not work at all – it was an empty box, it carved up the air.

Then one day one of us said, “I need something.”

“Then go and get it,” said the other. “What are you looking at me for?”

“It’s under the stairs.”

Even though we knew where it was, we searched the whole house first and even rooted through the car. A turtle dove watched us, purring in the highest branches of a tree. At last we went back inside and stood in front of the understairs cupboard.

We took each other’s hands and it was a surprise and a comfort.

The thing we were most afraid of was that it might have changed somehow. Perhaps it had tilted forwards and would come tumbling out on top of us the moment we opened the door. Perhaps it would be bigger than we remembered, or worse, smaller.

But when we opened the door it was exactly as we had left it, standing on its end, the broken rocker inside, framing an emptiness, but not one that wasn’t familiar to us already. In fact, seeing it again felt like alighting on a branch; at last we had something to push off against.

We pulled everything out of the cupboard and found what we needed. Then we put the crib back in, right way up, and filled it with everything that had been crammed behind it. Now when we closed the door it didn’t feel like a weight against our hands, and when we walked past there was no need to curve our steps towards the far wall. Brushing against the handle was no longer the worst thing in the world.

We allowed our caged grief to take flight, until it was time again.

We took the crib out from under the stairs and emptied it of everything but its own broken rocker. Then we carried it back to the upstairs room, and it bumped into edges and the soft parts of ourselves until we had it upside down on a sheet, helpless, belly exposed. We had never seen it like that before, and even as it stirred our pity, we found ourselves hating it.

We wondered whether we were angry enough to claw the thing apart with our bare hands.

“It would be better this way,” said the other.

The screws were old and rusted, but with enough force they could be turned. We detached the second rocker and began to take out the screws that tightened the sides to the base, but we saw straight away that it would not be so easy. Ridges of hardened opaque glue squeezed out of the seal between the base and the rest of the wooden frame, and we ran our fingers along them and pecked at them with our nails. But we carried on anyway, one of us dropping loose screws onto the sheet, the other putting them into a little dish. Of course, even when the last screw was out, the structure still held fast.

“Why would anybody glue this?” asked one of us.

“They probably never expected it to be taken apart,” said the other.

We attacked the seam with screwdrivers, which we jabbed into the glue and worked and worked so that we could get the points between the two pieces of wood, and then we levered up and down and side to side, mashing the wood and pulping the dried glue, loosening the base enough that we could force our fingers into the join and really wrench and tear until, finally, it came apart.

We sat back, breathless, on our heels.

“Do you think we’ve damaged it?” asked one of us.

“Let’s go and have lunch,” said the other.

When we returned there was a collared dove standing on the window sill, cooing and bowing its head. Now and again it paddled its little feet like it was excited about something. When we opened the window it flew away.

The frame of the crib now became our work table; we laid the base across it and trimmed off the ruined edges with a jigsaw, and then we cut the base into strips which became the shelves, secured with nails and glue. The old screws, some scattered on the floor, some collected neatly in the dish, all ended up in the bin. The crib’s old rockers became an unexpected decoration, added to the top of the new bookcase like deliberate wooden moulding.

When we had finished we stood it upright and examined our creation; the product of our plan, hatched. It bore the scars of our work, certainly, but it was sturdy, perhaps even sturdier than before. To begin with it was difficult not to see it as a bottomless crib standing on end, but as we stared at it we stopped seeing the shape of what it had been and began to see it in its most basic elements – pieces of wood, nails and glue – like looking at a word for so long that it loses its meaning and all that’s left are the empty letters.

Right then we wanted nothing more than to fill the shelves with books, but it had to be left to dry. So we went downstairs and out into the garden with mugs of tea, and the air was so crisp the steam looked like feathers. We stood among the violets and looked up at the open window. A breeze stirred the curtain and we knew it was setting the glue.

“Do you remember when we thought we would have to cut it in two to get it through the door?” asked one of us.

“I remember it all,” said the other.

We held each other’s hands as a distant cuckoo started to call.

Clare Diston is a freelance writer and editor through her business, Human Voices. She received her MA in Creative Writing in 2011 and she loves reading (and writing) literary and science fiction. She blogs about all things books at www.50ayear.com. This is her first fiction publication.